The Unofficial Pittsburgh Pirates Message Board

Ad blocker detected: Our website is made possible by displaying online advertisements to our visitors. Please consider supporting us by disabling your ad blocker on our website.

He was one helluva hitter.....Saw him numerous times....

What year did he try to make a comeback with the Pirates? Late 80s early 90s? Seems he was in Spring training for awhile but didn’t make it.
“The Autumn Wind Is A Pirate”
Top

Steve Blass didn't seem to be thrilled with it.
Top

Rennie Stennett is the reason I'm a Pirates fan.

I spent the summer of '77 with my grandparents. My dad was in the military and the summer before I had moved to Northern Virginia. I don't make friends too quickly, but those that I did make liked baseball. I didn't know shit about baseball, didn't much like it, and I was more of a soccer and tennis fan/player. But as I said, my friends liked baseball so I wanted to learn more about the game.

So that summer I pored over box scores in the local paper and that was the summer that Dave Parker and Stennett were 1 - 2 for the batting crown. I was completely entranced that two guys from the same team were atop the leaderboard. And that's when I started doing the math for myself, as I'm sure many of us on this board learned to do, adding one hit and four at bats (or whatever) to the totals to get the up-to-date BAs.

I was doing that for a month, maybe, and then BOOM. Stennett disappeared from the leaderboard. I went over his last week's games trying to figure out how a 4 - 30 week dropped him all the way below .312 or whatever the 5th guy in the leader's section had. I looked and looked, couldn't make any sense of it. And then after a couple weeks or so, there was Stennett again, somewhere in the mid to low .330s and just trailing Parker. And then a month later he disappeared all over again.

Obviously I didn't know about minimum ABs to qualify.

So finally, toward the end of the summer, the Pirates were featured on game of the week, and I was going to watch. So I got to see Stennett in person. And Dave Parker, just the biggest f'ing OF I could imagine. And then late in the game, Kent Tekulve came in and I was hooked. He was so weird looking and the glasses and the strange delivery. I don't wear baseball caps, but man, that pillbox hat. I came home from my grandparents and that was the first thing I bought.

Two years later I'm living in Northern Virginia and my friends are all mostly Orioles fans and we've got them in the WS. We're down 3 - 1 and I'm getting more grief than I did for being a Cowboys fan in Skins territory. And then I get three games to give back all the grief to my friends. Good times.

Yeah, Stennett is the reason I'm a Pirates fan. 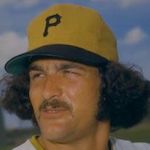 Rennie and Willie were my favorites as a kid. I never had Willie's power but I played 2B and tried to emulate Rennie, with minimal success.

Would've loved to have seen what he could've done if not for the devastating ankle injury. He was never the same player after it.

Return to “The Rotunda”